I was afraid of dogs when I was a kid. We always had cats, but dogs were too big, loud, and slobbery in comparison. There were also packs of mangy street dogs that roamed in the Cairo of my childhood, and I may have watched the movie “Cujo” in elementary school. So, like I said, I was terrified. When I was 11, I was forced to reconsider my views on dogs. We took a road trip through France that summer, driving a tiny rental car and staying at cheap hotels in the countryside. In the backseat, I listened to Amy Grant on my enormous Walkman. Our trip took us to Banyuls, a town on the Mediterranean coast near the Spanish border, where friends of my parents owned an apartment. Each night our hostess poured me a glass of wine diluted with some water, and we ate crazy things like goat’s cheese and escargots during pleasant neighborhood dinners in the alley. Our hosts were dog lovers. I think they had 3 dogs, but to a kid afraid of dogs, they might as well have had a dozen enormous beasts. One of the dogs was a stray they named after a traffic jam they found her in: Bouchon, or Bouchie for short. She was smaller than the others and appeared to be some kind of poodle mix. My parents and sister loved this dog and decided to adopt her. In the weeks that followed, while we waited for her to arrive in Cairo, I worried about how I would handle the new dog.

Of course, I fell in love with Bouchie, too. She wasn’t the prettiest, or best-behaved, and she never did learn to walk properly on a leash. Every time we came home, she would pee at our feet (apparently, some kind of submissive behavior), and she ate my books (entire books) right up until her old age. But she was our sweet Bouchie, and when she died in Kenya in 2005, we were all devastated. In fact, within 18 months we’d adopted two new puppies. My parents got Buddy from a street corner in Nairobi, and Dan and I bought Bella from a breeder in Blacksburg, Va.

I know it upsets a lot of people when dog lovers refer to their pets as their babies. Dogs are not children, they say. And this is undeniably true. But dogs are LIKE children sometimes. When Bella was a puppy, she had to go outside to pee eight times a day. At least eight times, and we lived on the fourth floor of an apartment building in Arlington, Va. When we had Charlotte we used to say that at least we didn’t have to change out of our pajamas to change her diaper. Dogs require a lot of care, and can prepare a young couple pretty well for what it’s like to have kids.

And if you ask any dog lover, they will tell you that it is easy to have an emotional connection with a dog.
New research suggests that dogs can indeed experience emotions:

“The ability to experience positive emotions, like love and attachment, would mean that dogs have a level of sentience comparable to that of a human child. And this ability suggests a rethinking of how we treat dogs.”

This makes sense to me. Sometimes I really feel like I’m able to communicate on an emotional level with Bella. She is extremely attached to me and she always wants to be physically close to me and the girls, and when she sees us after we’ve been gone for a while, she is so happy she actually yelps for joy. But does that mean we need to see dogs as people? There are so many dogs that need homes; do we really need to screen potential adoptive families the way we do for children, as the article above suggests? We may have allowed Bella to crash Andrea’s wedding (at the Inn at Perry Cabin, no less), but I certainly don’t treat her the same as my children. She is a dog. We love her, just not the same way. 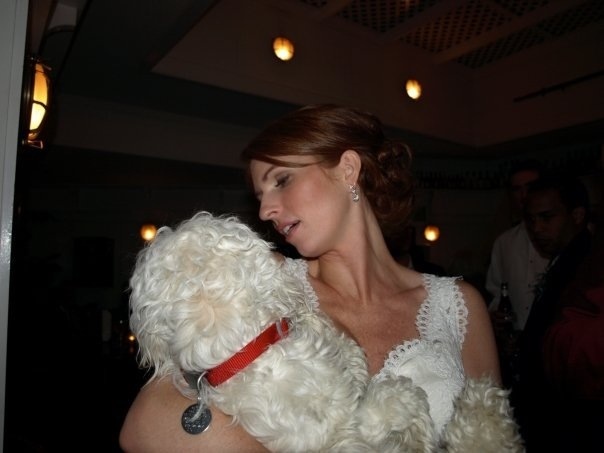 So, I am beating around the bush here, but let me get to the point. We are leaving our beloved Bella here in Rome with my parents. We believe she will have a better life with them. Even if it was safe to walk Bella in Addis, I just don’t think I feel comfortable with the idea. There are a lot of stray dogs there. We have a small yard, but Bella loves and needs her exercise. In Pretoria she got a long walk every day in our beautiful neighborhood. Here in Rome, she and Buddy get four walks every day.

There is also a little bit of this going on. We just don’t give Bella the attention she needs any more, even though she loves us more than ever.

We would never be able to give her to anyone but family. If my parents ever want to give her back, we will take her. I still feel guilty, and I am dreading saying goodbye to her next week, but I think it’s for the best. We had six wonderful years with Bella, and now she will go on to have great times with Buddy and my parents. 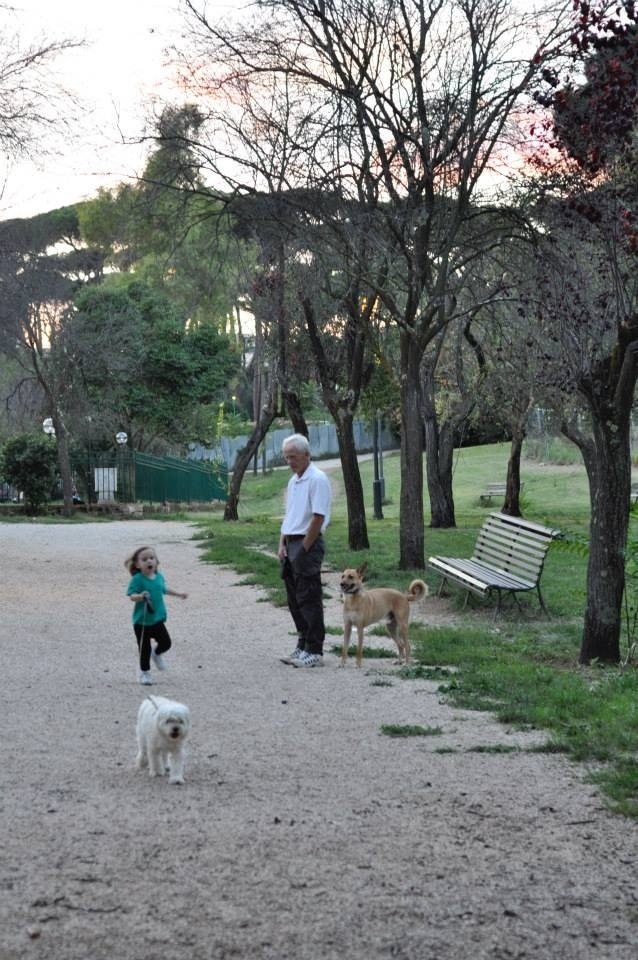