I’ve mentioned before that Charlotte and I take daily walks around the neighborhood. While Willa sleeps we leave her with the housekeeper, and we have a wonderful mother-daughter alone time. Yesterday we went to a nearby coffee shop on our way to the grocery store. When we walked in, Charlotte suddenly announced she had to use the potty. Great timing, I thought. But then she almost threw a tantrum when I tried to take her to the bathroom. As it turns out, Charlotte thought the bathrooms were upstairs, up the fancy glass spiral staircase that was just irresistible to a three-year-old. Her sudden urge had more to do with exploring than with bodily functions. The upstairs area appeared to be closed, so I said maybe we would go up there another day. “Can we go up the stairs for Christmas?” Aw, kids.

I’ve noticed that Ethiopians are really into receipts. With the exception of the fruit and vegetable stands, every shop and restaurant has a big sign saying “Do not pay without a receipt!” The receipts are very detailed, even for a $1 latte: 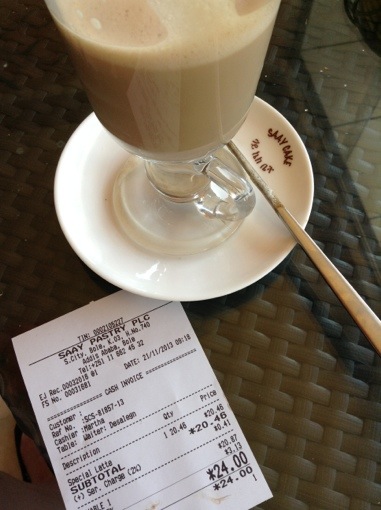 After coffee, we continued on our walk. A couple of blocks later, we realized the waiter from the coffee shop was running after us. Charlotte had forgotten her purse. Every time we do some stupid ferenji thing like leaving a purse or toy behind, I feel so embarrassed. I don’t want people here to think that we are so privileged that we can just walk away from our nice possessions. But that is exactly what we did, and privileged is exactly what we are. There is no escaping that fact here.

At our neighborhood supermarket, it is apparently extremely important that each scanned item is properly included in the system. We tried to buy some chocolate pudding for Charlotte, but the barcode wasn’t scanning. The woman at the register flagged down another supermarket employee, said something to him in Amharic, and he took the pudding away, presumably to get another one or look up the price. But no. The woman simply gave me my total (minus the pudding) and expected payment. When I asked about the pudding she called the other guy over again. More Amharic. (I really need to learn Amharic.) He goes away, and come back with strawberry Jello. Charlotte is very insistent that she must have the chocolate pudding. But it is not in the system so they cannot sell it to me. Well, I’ve learned that if you just keep insisting, people usually give you what you want–and magically, a price was determined and the pudding was purchased.

On our walk home, we identified all of the different trees and flowers along the way. Just a block from our house, I stooped down to pick up a beautiful almost-ripe avocado that had fallen from a tree. I noticed there were several, and almost took them with me until I remembered all of the begging children on the opposite side of the street. Why hadn’t they noticed the avocados? In the US those would have been an expensive find in a supermarket. I left them there hoping the beggars would see them, but for some reason I didn’t bring them over. Perhaps when I start learning Amharic I will feel a little more comfortable talking to people here.

Shortly after we got home, we had a surprise visitor. Our neighbor Mimi from across the street brought her 18-month-old son over to play! I immediately liked her for showing up unannounced. No one does that these days. We got so lucky in Pretoria when our neighbors invited us to a block party just a week into our stay there. We became close with several South African families on the block and it truly helped make Pretoria feel like home. It appears that we’ve gotten lucky with neighbors once again. I was so thrilled to make a new Ethiopian friend, it was all I could talk about at the dinner table last night. We have another play date this weekend. What a wonderful neighborhood.