People joke that going to the Marine Corps Ball is like going to prom again. Everyone dresses up in black tie attire, and then we take each other’s pictures. Unlike the prom, there is an open bar; also, you have to make small talk with your boss’ bosses.

Ten years ago in Pretoria, Dan and I were just friends. I wanted to go to the ball so badly but he said absolutely not. I convinced him to go with me by launching a guilt trip about my birthday. I said it was going to be sad to have a birthday without having a lot of friends around, since I had just moved to South Africa. So the least he could do was come with me to the ball so I could meet more people. I can’t believe it worked! Ah, the awesome power of guilt!

Last night we went to the Marine Corps Ball at the Sheraton in Addis Ababa. Getting ready for a ball when you have two little kids is really hard. My hair was not even nearly ready when our ride showed up. I have all these layers and I’m still not sure how to style them. But these days, with perfection unattainable, I’ll settle for half-done.

As much as we joke about the Marine Corps Ball being like a prom, it is inspiring to watch the annual Marine Corps birthday video message, to hear the national anthem, and pray together for our troops. Living overseas, away from our families and friends, and being somewhat immersed in a foreign culture each day, I sometimes forget what we’re doing here and who we work for. 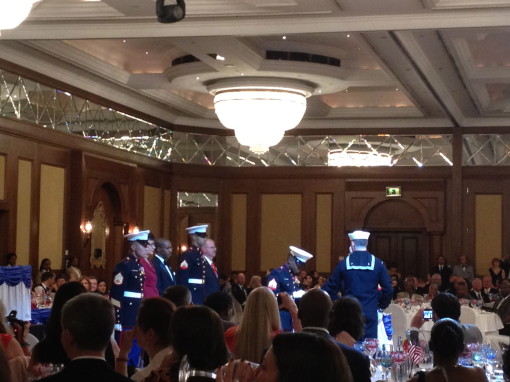 And it certainly didn’t hurt to sit in such a stunning venue (the Sheraton is absolutely GORGEOUS–I felt like I had stepped back into the US or South Africa) and eat decent food. It was the longest I have ever been away from Willa since she was born (4 whole hours). I felt less like a mom and more like a regular person. I talked a bit about my career, and met some interesting people. Unfortunately, we had to leave immediately after dinner was served, and were home by 9:45. I was so happy to come home and check on the girls, both sleeping like little angels. Sometimes getting away can make you appreciate coming home even more.