Seven years ago today, Dan and I got married. 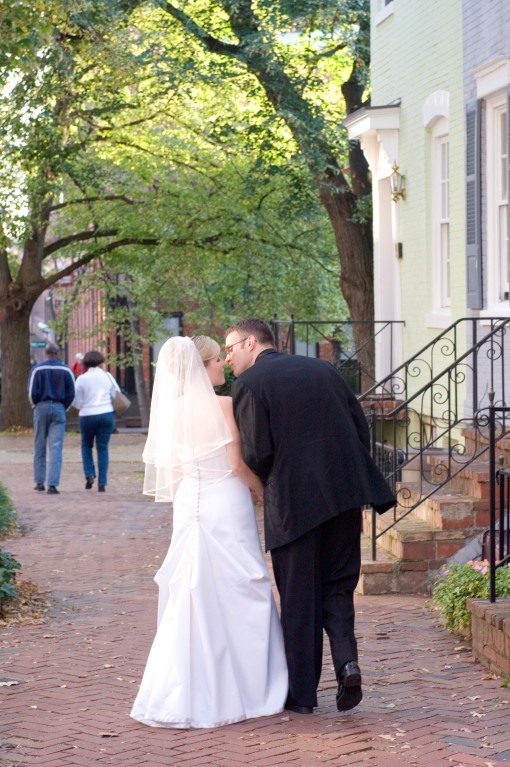 It was a small wedding in Georgetown on a beautiful October day.

Wait, let me back up because some of you don’t know the whole story.

A little over ten years ago, we met in Pretoria. I had recently finished college and went to South Africa as an intern, while Dan was working as a “Junior” Economist for an economic growth project. We started out as friends, and spent all of our free time together. I was only supposed to be in South Africa for a few months, but after I met Dan, there was no way I was leaving. I was able to change my airline ticket so that I could stay for a full year.

We ended up in different cities after that. Long distance dating was hard, but we were saved by a little start-up airline called Independence Air, which ran daily flights between Chicago and Washington for fares as low as $80 round trip. After a year of flying between our two cities, the airline was bankrupt, but we were still okay.

We spent the summer in Mexico after that. I did a summer program in international law in Cuernavaca, and Dan worked at an NGO in Mexico City.

We took the bus to see each other on weekends, and at the end of the summer, we went to Acapulco for a couple of days. Dan proposed on our first night there. This photo was taken just before we went to dinner, and I wonder if he had any idea that he was going to ask me later that evening:

I took a year of leave from law school to go be with him in Chicago. (While I was there, I picked up a master’s, which was a lot of fun too.) Then we returned to Washington so I could (reluctantly) finish law school.

Which brings me back to our wedding. There were about 50 guests, and we kept it really simple. We wanted great food, so there was a sit-down dinner at 1789 after the Catholic ceremony at Georgetown Chapel. After dinner, we rented out the bar next door for drinks (LOTS) and dancing. We hooked up my sister’s laptop to the sound system and she and her friends played DJ. What a fun wedding it was. And what a joy it’s been to be married. I’m not going to lie: it’s not all fun. We are truly exhausted right now. We’re trying hard to be nice to each other and to remind ourselves that this is hopefully just a brief period of hardship. Having what they call a “high-needs” or “sensitive” baby, at the same time that you’re moving all over the place… well, it’s just plain difficult.

Dan came through with two awesome gifts this year, by the way. He never buys me gifts (gift giving is just not our “love language” or whatever), so it was a big surprise that he got me a KitchenAid stand mixer (in red! yay!) and an Up band by Jawbone. Two things that I specifically mentioned over the course of the past year that I really wanted.

Well, for our anniversary evening, we’re going to watch an episode of How I Met Your Mother. Okay, not the highest quality television, but don’t judge–when I was really sick during my last pregnancy and couldn’t do much except mope on the couch, my friend Amy introduced us to HIMYM and we watched 7 seasons in just a few months. Willa probably knows the theme song from hearing it so often in utero. It became a comforting nightly routine for us. And that’s why we’re still okay: we adapt. We find new ways to bond. We never believed that marriage would be a fantasy world with rainbows and unicorns. We’re partners, we’re in this together, and right here and now, we’re all we’ve got.