I sort of dropped the ball when it came to Charley’s fourth birthday. While I’m feeling like kind of a bad parent, I am also very proud of Charley today. She didn’t complain once. First of all, it was a dark, rainy day in Addis–something that was totally out of my control but I still felt badly about it. As we drove to the Sheraton for the fancy lunch she requested, she said “wow, it’s such a beautiful day today for my birthday!” and I think she meant it. She inherited Dan’s optimism.

We ran into a friend at the Sheraton and he asked her if she got lots of presents. Dan and I looked at each other and frowned. But our sweet kid replied, “my presents aren’t here yet! But they’re on the way!” Unlike when you order things online in the US and a drone simply drops them into your lap 15 minutes later (that’s how it works, right?), when we order things it takes a few weeks to receive them. Obviously I could have planned ahead better, but I failed to. At least she knows she’s getting the one thing she’s been asking for all year: a new bike. Hopefully we’ll have some days without rain so that she can use it.

The day was actually pretty wonderful though. No tantrums, no whining. It was just the four of us. Lunch was a buffet–perfect for children. Charley got to eat all her favorites: strawberries, tomatoes, olives. The rain stopped just in time for us to have a leisurely walk around the Sheraton, and the girls had a great time exploring. In the afternoon, I baked a chocolate cake with cream cheese frosting. The end result wasn’t pretty, but it was one of the best cakes I’ve ever tasted. We Skyped with family and friends back home, and the girls both passed out by 7:00, presumably content after such a peaceful day.

If I’d planned a birthday party for her, there’s no telling how much stress that would have added to our lives this week. I know, I know, at some point I’ll have to throw birthday parties for them. But for now, I don’t think it’s something they necessarily even want. When I asked Charley a few months ago who she wanted to invite to her party, she said, “Mama, and Dada, and Willa of course.”

As Dan and I were cleaning up the kitchen tonight after the girls were in bed, I realized with horror that I’d completely forgotten about the party hats! Charley and I bought them a week ago and she has been asking if she can play with them every day since. “No, honey, those party hats are for your birthday.” Well, now they will be for the day after her birthday. I cringe a little bit when I think about how patient she was all week, but I refuse to worry about this. Charley was happy all day long. We must be doing something right… or at least, we’re not doing everything wrong. 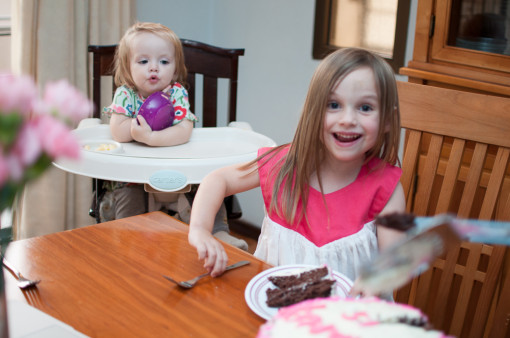