It’s been a while since I last posted. Some of you might have noticed that I removed a couple of slightly negative posts. I want to keep this blog positive for many, many reasons (personal, political, legal…) so you’ll just have to cope with that. I’d love to fill you in on some of the crazy stuff that’s happened here lately, but I hope you understand that I just can’t do that in a public forum without risking that someone will take it as criticism.

We’ve been busy! Last weekend, we hosted a young doctor who is in town to teach at the medical school. It was an absolute pleasure to have him around. It gave me an excuse to cook nice breakfasts, and Charlotte has been playing with her doctor kit ever since (although, when I ask if she would like to be a doctor someday, she says, “or I could be a soup, or a train, or a girl”). After our guest left, Dan’s parents arrived. It has been so wonderful to have them here. I’ve been showing them different neighborhoods during the day; we walk around and chat with the locals. We get invited to coffee every few minutes. My Amharic is improving! I told someone to speak slowly because I am just learning (“kas ba kas”), and he said, “aw, kas ba kas enkolal!” Puzzled, I asked, “you mean enkolal, like an egg?” And he nodded. I think I just learned a new expression. Slowly, like an egg turns into a chick, maybe? Something like that. I am so impressed with myself.

In other news, very exciting news that I can’t believe is true: I’m like, a photographer now. I’ve been discovered, y’all. I know I’ll get criticism, I know that some people won’t like my work, and I know I am still starting out, but it doesn’t seem to matter anymore because I am confident now. From now on I will put all of my photography-related posts on my other blog: http://jacarandatreephotography.com

Yesterday, Charlotte came home from school with a valentine she made, just for me. My heart melted. While we ate lunch she asked me why I wasn’t wearing a Valentine’s Day dress. She has never asked me to wear anything specific, so I played along and told her she could pick something out from my closet. “Okay Mama, after lunch you’ll put on a dress, and then I want you to sit with me and your card, with the flowers Dada gave you. And Grandma will take a picture.” Okay… she never wants to pose for photos! But I complied. She even picked out the shoes. And this is the sweet result, me and my girls, photos by Grandma. 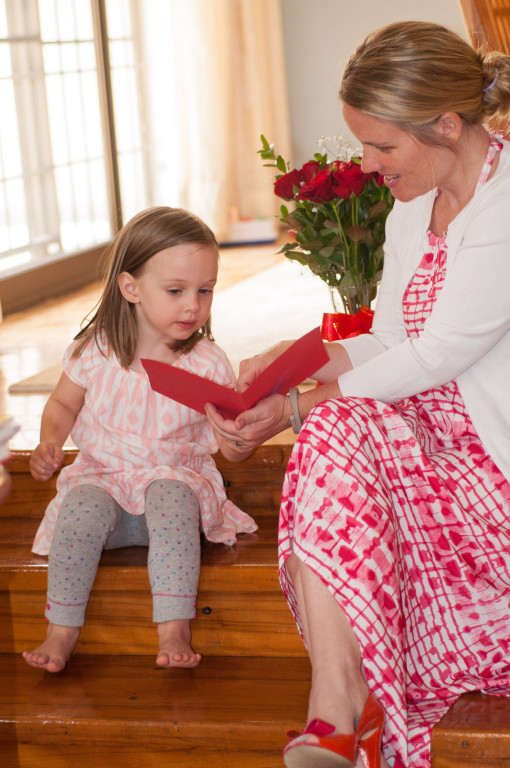