Our daughter Charlotte is very independent and strong-willed. When she went to preschool in South Africa, I would come to pick her up during my lunch hour and find her in the very back of the room, standing up during story time. All of the other kids were sitting close to the teacher, but my kid just refused. It was especially weird because she is not antisocial at all. She loves playing with other kids. I think she just doesn’t like to be told what to do. As a rule follower and people-pleaser, this bothers me a bit. Will she learn to follow instructions in school? She says she’s been getting timeouts at school a lot lately for “not being a good listener” (at least she’s honest about that). Dan says not to worry, and that he was the same way as a kid.

One of the great things about being in Addis Ababa is that it’s a big hub for travel in Africa. In two months, I’ve been able to see several friends who were flying through for work or vacation. My friend Megan stayed with us on her way to a beach vacation. At the breakfast table, Charlotte wanted to be the center of attention, as always. Megan calmly explained to her that it’s polite to let other people speak from time to time. It was a familiar refrain. We keep telling Charlotte to wait her turn to talk, but it’s just not sinking in. Her teacher said they are trying the same thing at school. Now, this trait is all me, not Dan. I still have to remind myself to let others talk once in a while.

The same thing happened when my friend Laura was here last week. Charlotte was demanding constant attention from everyone at the dinner table. She hadn’t slept enough the night before and her behavior was going from annoying to obnoxious. Laura was great with her; she was very firm and tried her best to get Charlotte to be more polite. I had given up. Everyone knows that dinnertime is the witching hour. You just survive it. At one point, Charlotte barked at me “Mama, go get me a bowl!” (pronounced “boule”) and I found myself saying, “okay.” As soon as I heard myself, I backtracked. “Did I hear a ‘please?'” But it worried me. Was I only demanding politeness because we had a guest to witness it? Do I often give in when Charlotte bosses me around? I’m afraid the answer is probably yes. I get so tired of correcting her. If consistency is key, I might be failing.

Parenting seems downright impossible sometimes. It’s so hard to know when to let things go and how to pick your battles. Sometimes I am too hard on Charlotte. Not so much lately, because I’m making an effort to be less controlling. “Oh, you spilled milk all over the table and carpet again, after I asked you not to play with your cup like that? No problem kiddo. Just be more careful next time.” A few months ago, my response to such an incident would have involved yelling.  It’s not the spilled milk, but the repeated behavior after asking her many times to stop, that drives me mad. It’s like she just won’t listen to me. And then she shows no remorse whatsoever when I express my disappointment.

But she’s not always so willful and difficult. She is also really kind and helpful and generous. She always offers me some of her advent candy. She insists on carrying at least one grocery bag when we walk home from the store. And she is so hilarious. At dinner tonight at a local pizza place, she announced “I think they have bathrooms here.” This is a cue for us to take her to the potty. Dan took her, and the first stall was pretty gross. The second one was okay, and apparently she said “oh Dada, this toilet has a seat–it’s fancy!” Here’s another anecdote: she was playing in the waiting room at the doctor’s office last week, and she turned to Dan and said “Dada, I think you are the best Dada in the whole world. (beat.) Now get over here and play with me!” How can you not love this kid? That’s another Charlotte quote: “everybody loves me!” 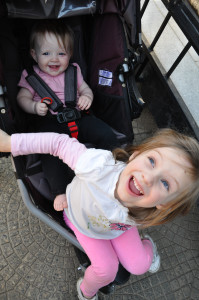 I was trying to wrap up this blog post earlier today by finding nice things to say about my precious daughter, even though Charlotte was in the room and I should have been paying attention to HER. Big mistake. She walked over and sort of punched me in the back, and said “Mama, LOOK AT ME!” Okay, she got a timeout for that one.